Trouble and mischief, his friends being sad, being alone, The Farmer's stubbornness and mischief towards him, waterfalls, spiders, danger, cats, postmen, monsters

Shaun, The Flock, The Farmer

The Naughty Pigs, Pidsley, Trumper, The Farmer's Niece, The Postman, The Bull, The Mole, The Fox

Bitzer is the deuteragonist in Shaun the Sheep. The yellow, long-suffering sheepdog, only wants a quiet life - but this is the last thing he is going to get when Shaun is around. He is close friends with Shaun and The Flock, but is utterly loyal and devoted to his farmer. He wears a blue wool-knit cap on his head, given by the farmer as a puppy, and is rarely without his trademark whistle or wristwatch.

Flashbacks to his younger days show Bitzer has been a sheepdog his entire life. He was first seen on the farm as a Puppy being cared for by a young Farmer and grew up alongside Shaun in his days as a lamb. Bitzer and Shaun would grow up together, forming a tight bond of friendship, but Bitzer would always see the Farmer the one true authority, as well as a loving caretaker.

Like all animals on the farm, Bitzer is unable to speak, although unlike the other animals, the Farmer seems able to understand Bitzer's barks with relative ease. Bitzer typically uses his Whistle to convey orders or attract attention and uses it in his everyday life as a sheepdog.

Though Bitzer usually acts as a straight man on the Farm, he is not without his less serious moments. Often times, such as when presented with the notion of a game of Fetch, he will act like an excited though ordinary dog, which can occur even if he himself threw the ball or stick to fetch. He is also prone to occasional bouts of laziness in his chores, during which his time is spent reading magazines or lounging in the sun. He is also an avid sports fan and has more than once abandoned his duties for any game that presents itself.

Shaun the Sheep the Movie

Bitzer appears in the film as the secondary protagonist.

At the beginning, he is shown as a puppy, the farmer (Mr. X) gives him his hat, causing him to run around the farmer's legs.

In the present time, he is seen working with his owner on the daily schedule, always ensuring that everything is followed properly to the Farmer's demands. However one day, Shaun hatches a plan to create a day off for him and the rest of the flock, intending to have the Farmer and Bitzer distracted while the rest of them can enjoy themselves and have a carefree day. Shaun ended up bribing a common bird with a load of bread to keep Bitzer distracted, and did so by getting Bitzer to chase around a bone, something which he naturally enjoys. However, eventually, Bitzer was able to catch both the bone and the bird and soon realized what Shaun and the rest of the flock were up to.

Angered, Bitzer put a stop to the party Shaun and the rest of the flock were throwing inside the farmer's home and ordered them to tell him where they left the Farmer. Once realizing that Shaun made him fall asleep and left him in an old trailer, Bitzer tried to open the door to the trailer, but it was jammed shut. The flock tried to assist him in opening the door, but unfortunately their strength ended up snapping both the door handle, nad the log of wood keeping the trailer from moving. With the trailer moving on its own, Bitzer and the flock tried to stop it from moving away from the farm, but to no avail. Once the trailer had busted through the gates, the flock intended to follow it, but Bitzer halted them from going any further and instructed them to go back to the farm, believing they had already done enough.

Bitzer then followed the trailer, hoping to catch up to it in order to wake up the Farmer, but unfortunately fell down a steep hill and made its way into the city close to the farm. Bitzer eventually caught up with it, only to witness the Farmer being taken to the hospital. With dogs not allowed within the hospital, Bitzer had to disguise himself as a doctor and searched every room he could while trying to avoid anyone from discovering him. He later ended up in a surgery room, but was then discovered after his instincts took over and began chewing on a nearby bone from a skeleton. Soon after, he was captured by the pest controller Trumper and taken into the kennels along with the other captured animals.

Once Shaun was also captured by Trumper after the restaurant incident, he was later reunited with Bitzer in the kennels where Bitzer ended up yelling at him for a while due to the shenanigans he had pulled which got them both stuck in there. Luckily, the flock was able to break out Shaun and Bitzer, and from there they continued onward to find the Farmer and return home. Once they were able to locate him at a haircut store, the farmer ended shooing them all off from him instead, saddening them and later leaving him be. However, they discovered a document from the hospital with the Farmer's face on it and soon realized that the reason he didn't recognize him was that he'd lost his memory.

Later on, Bitzer and the flock create a horse-looking machine to help them bring the Farmer back to the farm, where they soon after made him fall asleep in order to bring him with without any trouble. However, Trumper was still right on their tail in recapturing Shaun, Bitzer and the rest of the flock, but luckily they were able to outwit him and bring the Farmer and the trailer back to the farm. But as soon as they did so, they discovered that Trumper had still continued to follow them, and fled into a nearby shack with the still unconscious Farmer where Bitzer nailed the door shut so Trumper couldn't get inside. Nevertheless, this led to their downfall as Trumper used a nearby bulldozer to push the shack off a large cliff. Luckily the Farmer had finally regained his memories and along with Shaun's help, stopped Trumper for good.

Bitzer and Shaun are shown to be very close, embracing near the end of the film having overcome the hardships presented in the movie. There is some very clear subtext here hinting at their very special bond. They have a solid and forever true bond between them. They were like brothers to each other. They are later seen along with the entire flock during an after credits scene where they see the Farmer watching the news, only to be surprised that the Farmer was watching a news story about himself having gone missing from the city.

As a new day begins for Shaun and the Flock, Bitzer becomes increasingly bothersome when he forbids them from having various fun activities that he considers too dangerous or reckless. When Shaun orders some pizza, Bitzer catches him with the delivery and demands that Shaun surrender the pizza, only to discover it's been mysteriously eaten.

The next morning, Bitzer is furious with Shaun after the latter wrecks the Farmer's tractor, later revealed to have been driven by the alien visitor Lu-La. After a series of further extraterrestrial activities, Bitzer is put in charge by the Farmer to build an alien-based theme park "Farmegeddon" in the hopes of affording a new tractor. Dressed in a silver astronaut-like costume, Bitzer places flyers around town, only to notice Shaun leaving the market. Attempting to follow him, Bitzer gets his foot stuck in a bucket of glue, leaving a messy trail that gets the attention of the Ministry of Alien Detection (MAD), who believe Bitzer is an alien.

Following Shaun into the forest, BItzer stumbles across Lu-La's invisible spaceship and is made to sleep with an alien inducer. Upon awakening, he leaves the spaceship, to discover it's been acquired by MAD, who are convinced that he's an alien visitor and attempt to welcome him to Earth.

Fleeing from MAD, Bitzer reunites with Shaun and is introduced to Lu-La, who has lost a device that powers her spaceship and can be used to contact her home planet. After retrieving the device, the trio blast off into space, until Shaun damages the spaceship by disobeying Bitzer's order to not push any buttons. The spaceship crashes back on Earth, beyond repair, and Bitzer attempts to comfort a grieving Lu-La.

Finding the contact device still functional, they realise they can still contact Lu-La's family to come and take her home, if they can climb to the top of the Farmer's theme park sign. MAD arrives on the scene and attempts to capture Bitzer, only for his astronaut suit to fall off and recognised as a normal dog instead of an alien, before noticing Lu-La.

Fortunately, Lu-La's parents arrive and MAD ceases to capture the aliens, recognising them as friendly, peaceful beings. Bitzer joins Shaun and the Flock in saying good-bye to Lu-La as she and her family leave Earth to return home. 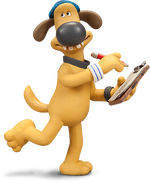 Bitzer in A Shaun the Sheep Movie: Farmageddon 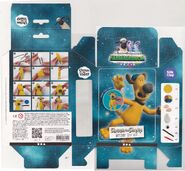 Bitzer Farmageddon Diy Kit
Add a photo to this gallery
Retrieved from "https://shaunthesheep.fandom.com/wiki/Bitzer?oldid=13157"
Community content is available under CC-BY-SA unless otherwise noted.