This article is a stub. You can help Shaun the Sheep Wiki by expanding it.

Farmageddon: A Shaun the Sheep Movie

The Naughty Pigs or The Pigs. They are one of the main antagonists in Shaun the Sheep, housed in a yard next to the sheep’s field, the Naughty Pigs are the bane of Shaun’s life.

Mocking, cantankerous and greedy, the pigs are always trying to antagonize The Flock and get no greater pleasure than disrupting Shaun’s schemes. They are, however, scared of Bitzer, who puts them in line, and even more deeply terrified of the Farmer's wrath. While they are bullies, the pigs are highly intellegent and physically capable. They are capable of operating vehicles, such as a car (The Big Chase) and an airplane (Pig Swill Fly), and are capable of plotting elaborate schemes. On the rare occasion, such as in The Phoney Farmer or Duck!, they'll actually cooperate with the Flock, if begrudgingly.

After Shaun and the Flock travel to the city in search of the missing Farmer, the Pigs being partying in the lost Farmer's home, utterly destroying it. Later, when the Flock has successfully brought the farmer home, they immediately panic and begin restoring the damage caused.

The Pigs as they appear in Series 1. 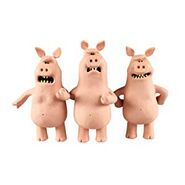 Add a photo to this gallery
Retrieved from "https://shaunthesheep.fandom.com/wiki/The_Pigs?oldid=13241"
Community content is available under CC-BY-SA unless otherwise noted.