baby lamb of the Flock

Trumper, The Pigs, The Farmer's Niece

Timmy is a notable member of the flock and the tritagonist of the British television series Shaun the Sheep. Timmy also stars in his own series Timmy Time. Adorable but not as innocent as he looks, Timmy is a baby lamb who sucks a pacifier and has a tendency to get himself into dangerous and lethal situations. He is the cousin of Shaun the Sheep, the titular hero of the series.

In Timmy Time, he experiences the highs and lows of daily life at nursery, learning to share, learning to work as a team, being kind and helpful and owning up when you’ve made a blunder. Timmy has a whole host of furry and feathered friends who help, and hinder, his adventures. He is voiced by Justin Fletcher. He does not appear in Fetching; Two's Company, Zebra Ducks of the Serengeti, Bye Bye Barn and Wildlife Watch. He tends to get himself in dangerous and lethal situations, even in Supersize Timmy, he eats miracle grow serum, getting super big and attacking the farm.

Timmy is by far the tiniest member of the Flock. He sucks a yellow binky with a rabbit design.

He has an ability of hiding himself in his own piece of fleece, as shown in S02E10, where the farmer took him as pillow since he did not know it was Timmy

Secret: His dream is that one day, the farmer will let them do whatever they want.

Likes: His teddy bear, swimming, watching games and playing with his mother.

Dislikes: The Farmer hanging him on the clothesline, Mower Mouth drinking from the toilet in the dump, Shirley's hiccups. 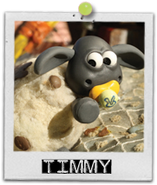 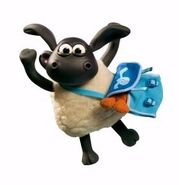 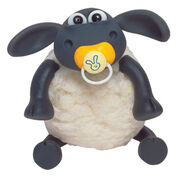 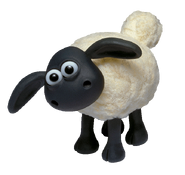 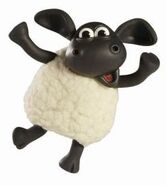 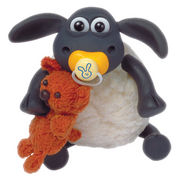 Add a photo to this gallery
Retrieved from "https://shaunthesheep.fandom.com/wiki/Timmy?oldid=13136"
Community content is available under CC-BY-SA unless otherwise noted.